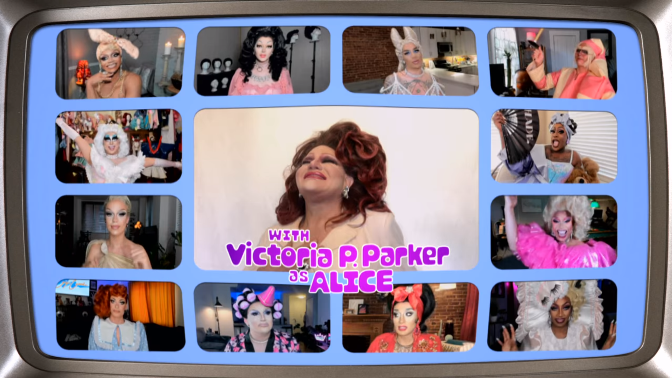 As usual, this entry will be bringing you ten things I found notable, fun, entertaining, revealing, or in any way prominent from this year’s Reunion, held in isolation. So no throwing wigs. Much. 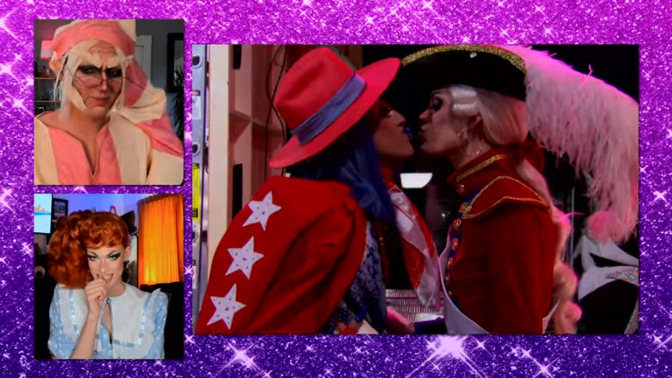 Did you know this was a thing? I did not know this was a thing. Other than in the way that I presumed it was a thing because I presume every single combination of girls has been fed through the slashfic shipping machine at this point. Anyway, a whole portion of this show’s fanbase have apparently convinced themselves that Crystal and Gigi are shagging, so they both did their best non-denial denials and made arch snappy comments that can easily be put on merchandise. I mean, they’re not really Branjie are they? Speaking of which, it would be remiss of me not to mention that Miss Vanjie herself turned up, still trying to get into Jackie Cox’s pants, even whilst they’re both in lockdown, even whilst they’re both in lockdown on opposite coasts of the United States Of America, even whilst Jackie is in lockdown on the opposite coast of the United States Of America with her boyfriend. A true corona icon, professor Neil Ferguson WHO? 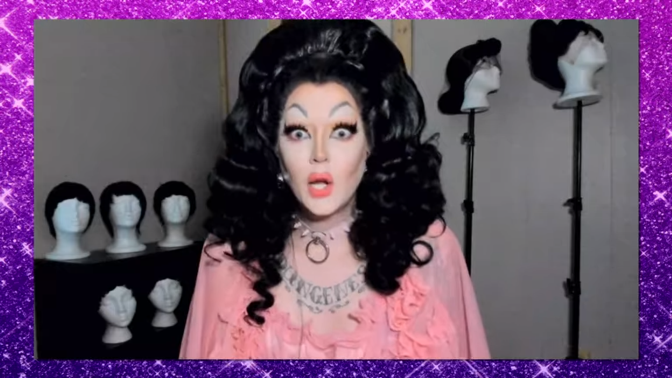 The fact that the reunion was being done via Google Hangouts meant that we were given some insight into the interior decor tastes of all of our queens (except Ru, obviously, Ru was on green-screen, you’re not seeing inside Ru’s fracking mansion, not without paying an entrance fee, those Bob Mackie gowns are viewable by appointment only). Gigi was in her living room surrounded by her own merch, Brita was situated in cosy middle class opulence with a pool table, the true queen of New York, Jan is living in every musical theatre graduate’s first apartment, Rock was in her fabulous closet surrounded by hundreds out outfits and Aiden…was in his airing cupboard backed up by 8 of the same wig. A true bedroom queen. 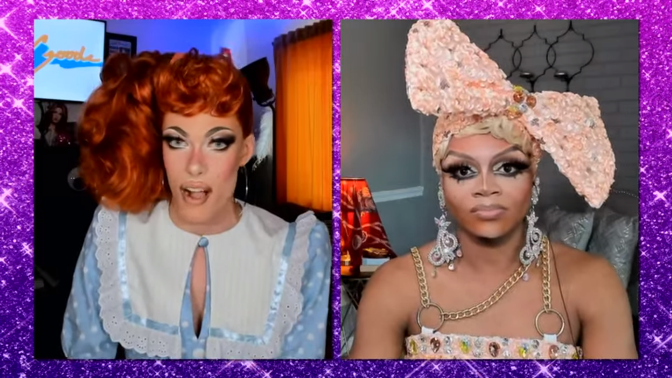 Coming in, this reunion really had two feuds that needed resolving – Aiden vs Brita, and Gigi vs Heidi, and in both cases everyone shook hands and apologised and agreed that nobody bullied anyone and it was just the stress of the competition and everyone learnt so much about themselves and everyone in this cast loves everyone else in this cast like a sister (or in the case of Sherry Pie, Aunt Helen from Perks Of Being A Wallflower), which was kind of boring, but Heidi vs Gigi gets on this list for it serving as the platform for Heidi to tell Ru that she’s staying Heidi N Closet forever, thank you very much. Amen to that. (Also a bit for Heidi saying that she used calming techniques garnered from previous anger management classes to not punch Gigi in the face) (Reminder of Heidi’s actual reaction – running around the room yelling “FUCK YOU! FUCK YOU! FUCK YOU! FUCK YOU!”)

Jan turning up to the Reunion literally wearing Jan? Classic JAN! Hey, at least she has successfully identified her most memeable moment. And sure, her admitting that her tears after Brita’s elimination were mostly actually about her having just finished in a poor, shameful, DISGUSTING second place in the Rusical Challenge wasn’t really a psychological insight that we weren’t already aware of, but a little bit of self-awareness on this show is never a bad thing. But only a little bit. Also Jan? Would not stop dabbing for no reason throughout the entire episode. Again? Classic JAN. 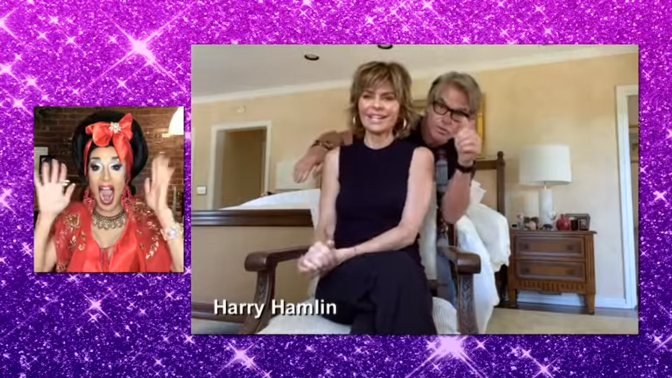 I guess if you can’t get Sophia The Robot, then this was the next best thing. 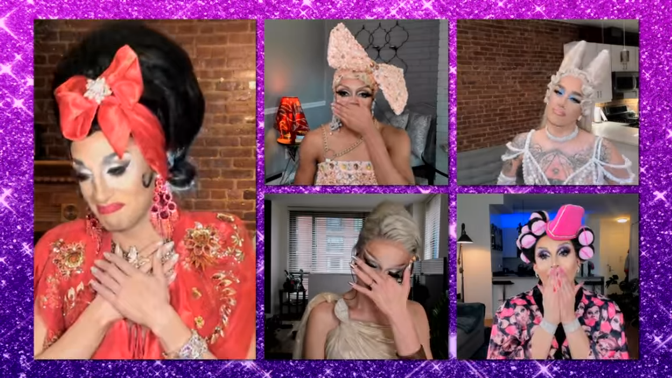 Of course Jackie had already done all the work she needed to work through her childhood trauma via that one woman show she put on, but this show is never beyond putting seventeen cherries on the sundae, so here we were treated to a reading of a letter from the woman herself, Jackie’s mother, sent to Ru directly, saying that she loves her son and she couldn’t be prouder of him having made a success of his chosen career. Aw. Also the letter began “Hello, I’m Darius’ mom, and I’m well aware of his participation in your tv show” which…can we get Jackie’s mom to do a Reading Challenge, because that is some shade. Anyway, it turns out that Jackie’s mother almost died as a result of serious health issues between Jackie filming the show and it airing, prompting a serious discussion between the two of them wherein Jackie revealed that she is a drag queen, and her mother decided that as she’d faced death itself, her son working in the queer performing arts doesn’t seem quite as scary. To which I say, just skip his performance in the Madonna Rusical still maybe. 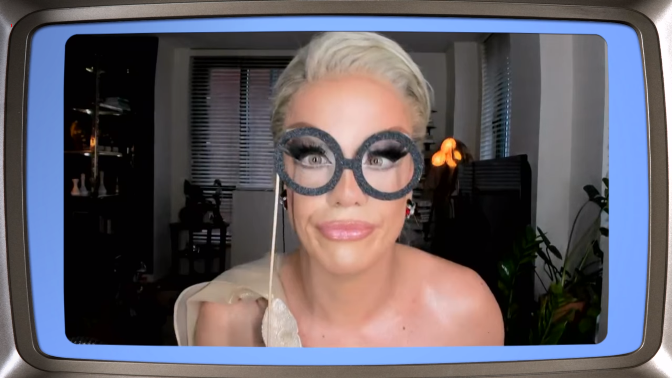 I think it’s fair to say that at this point that Nicky is the least talked about girl of the season? Dahlia has her Fierce Brocc-Ally gimmick (even if 96% of the audience hate it) (<3), and Rock has that footage circulating around the Internet of her getting sucked off in the middle of the street (kudos to Jackie for slipping in a joke about that, an improv queen to the last) so even both of the girls she beat in the competition have something over her, buzzwise. So good for her turning up for the reunion ready to make herself heard, and not in an embarrassing Kahanna Montrese way. Nicky was loud, Nicky was engaged, Nicky was fed up of Americans acting like she talks like Pepe The Pew, and Nicke was ready to tell everyone off who said she should have been in the Bottom Two for her performance of the funny baby, which she has since decided was iconic, wouldn't you all have rather said noted season pariah BRITA should have been there instead hmmm? (Everyone's reactions to this probing were revealing, by which I mean Brita and Crystal both hemmed and hawed and apologised and Heidi said that she meant what she said and she'd say it again) (Heidi <3). Oh also possibly Nicky got fucked by Pete Davidson when she did his make-up for an SNL skit, or at least that was the implication, excellent. 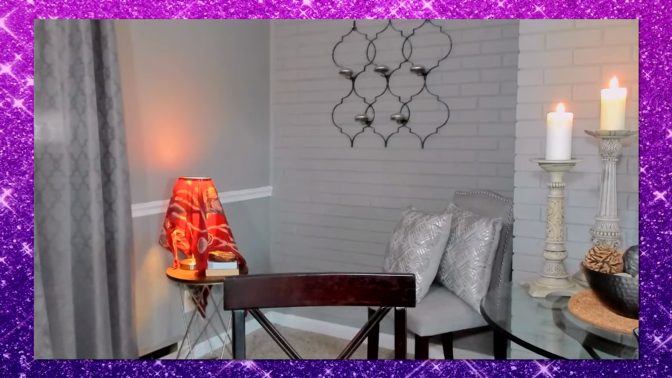 3. Heidi Goes For A Shit In The Middle Of Toot Or Boot

I mean, I have nothing against Toot Or Boot as a segment but… 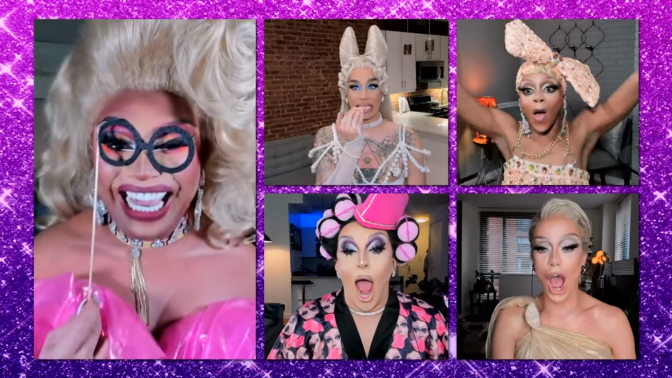 A lot of this reunion was dedicated to staunching the flow of death threats to Brita from depressed goths everywhere – she apologised to Aiden, Aiden accepted her apology, she was the only non-finalist to get positive reviews in Toot Or Boot, both Jan and Jackie queued up to give her character references from outside the show, she got to appear in boy drag for a q & a skit alongside Vanjie…It was a lot. In a noble cause, but a lot. Especially as all they needed to do was show her saying that Dahlia “talks a big game for someone who managed to finish 13th in a 12 queen season” and that would have been enough for me. Widow was a close second, Gigi put in a creditable effort before she made it all about Crygi again (NO), and Aiden complaining about Brita’s spittle remains iconic, but if there had been a true reading challenge on this season, know that Brita would have won. 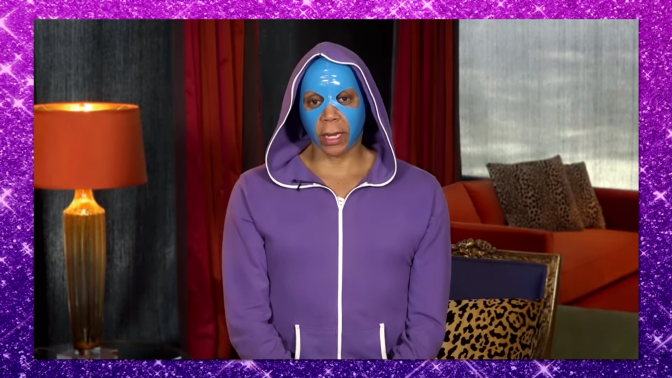 1. The Lockdown Of It All

Not that it’s saying a lot, but this was clearly the best reunion since Season 9, as this series just continues to deliver during this lockdown. Ru turning up dressed as luchadore Darth Vader because he couldn’t be faffed to even attempt to do hair and make-up? The constant campy cutaway reaction shots? The general feeling of community at this difficult time, by which I mean a time without EUROVISION, or proper Britain’s Got Talent, or whatever crappy new aborted attempt at a shiny floor competition show the BBC would have put up for ridicule in this time slot? That Little Mix thing? Anyway, all credit to Drag Race for putting out such a fun hour of tv so slickly. I didn’t even have space to include Widow’s iconic rap skills, or Jaida’s gag of a sleeptime diva outfit or Dahlia’s hot brother or Jackie’s hot dad or any other of the little things going on here. After All Stars 5, and Brooke Lynn Hytes’ Drag Race Canada, we’re going to be without this show for a long time, and it’s going to suck.